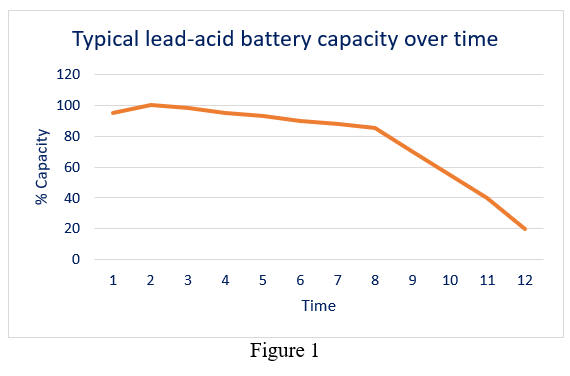 This is the ninth in a series of units that will educate the reader on the part played by a battery in an uninterruptible power supply (UPS) system.

Measuring the health of a valve-regulated lead-acid (VRLA) battery means more than just taking a voltage reading.  A cell or battery can have the desired voltage when it has been sitting on float charge, but it might not have enough stored energy to support the critical load for more than a few minutes or even seconds.

IEEE 1881[i] defines two terms that are of great interest to battery owners and operators:

state of charge (SOC) is “the stored or remaining capacity in a battery expressed as a percentage of its fully charge capacity.”  SOC is akin to “energy,” that is, “What is the voltage output of this battery at this moment?”  A battery can be fully charged, but because of age or other factors it might not be able to hold up the load for the desired time.

state of health (SOH) is “a measurement representing the present state of a battery’s available capacity or remaining service relative to rated capacity or specifications.”   SOH is akin to “power,” that is, “How long can my battery support my load?”  It adds the element of time and is useful in predicting the “life expectancy” of the battery.

While these two terms sound a lot alike, there is a difference.  The term “state of charge” is often misunderstood and misused when the speaker is really referring to “state of health”.  SOC tells you the capacity of a battery at the time it is measured (e.g., 95% of its rated capacity).  SOH is more predictive, telling us the expected service life (usually expressed in units of time or number of cycles) remaining in the battery before it needs to be replaced.  SOH cannot be extrapolated without first knowing SOC.

Figure 1 shows the typical state of health (SOH) over time.  A lead-acid battery is usually still forming when it is first installed, then in begins to lose capacity over its lifetime.  When it reaches 80% of its capacity it begins to rapidly decline.  That is why 80% is considered the “end of life” of a lead-acid battery.  When the capacity reaches 85% it is wise to start planning for eventual replacement (which may be many months or only weeks depending upon cycling activity).

The most accurate tool in use today to calculate SOH is known as “internal ohmic measurement,” defined by IEEE 1881 as follows:

internal ohmic measurement: “A measurement of the electronic and ionic conduction paths within a cell or unit, expressed in terms of conductance, impedance, resistance, or admittance.”

In the late 1990’s and into the early 2000’s, there was a lot of debate about which was the best indicator of SOH, but in the end the monitoring manufacturers reluctantly agreed that conductance, impedance, resistance, and admittance are all variations of the same condition (i.e., opposition to an electrical current) and all will produce similar results expressed in different units of measurement.  For example:

Ohmic measurement is not 100% precise.  A single ohmic value can vary because of recent charge or discharge activity in the battery, inconsistent manual measurements, environmental conditions, differing ages of cells within a battery, loose connections, or for other reasons.  Therefore, ohmic measurement is only reliable for trend analysis.  Ideally, data is recorded throughout the life of a battery (starting approximately six months after installation).

Readings early in the life of a battery can be erratic.  A base line should be established during the acceptance test, but expect that readings will be inconclusive until the battery has matured for a few months or it has experienced some discharge cycles.  When stabilized, all cell ohmic readings in a string should be pretty close to one another.

When one cell deviates significantly from the average within the string (i.e., it becomes an “outlier”), it needs to be monitored more closely to determine if the deviation is a one-time anomaly or if the cell continues to worsen.  If a cell continues to deteriorate relative to its neighbors, the cell probably needs to be replaced.  If several cells exhibit similar behavior, that would suggest that it is time to perform a discharge test.  If the battery fails the test, it is time to replace it.  Sometimes the discharge test will actually serve as an equalizer, bringing outlying cells back into the predicted range.

Ultimately, a discharge test is the only way to know with great accuracy what the capacity of the battery is . . . or was before the test.  Because every discharge takes life from the battery, the remaining life must be estimated.  On a healthy battery, this is not a problem.  When a battery is near end of life, a deep discharge might speed up its demise.

Measurements can be collected manually or continuously.  Obviously, continuous measurement is the preferred method.  Manual collection can be corrupted by such things as inconsistent placement of the probes from one cell to another, incorrect record keeping, use of different measuring devices from one time to the next, loss of records, a long time period between measurements, or other human error.

Continuous measurement has the advantage of timeliness.  If a cell starts to fail rapidly, it might not be detected by manual readings for several months, whereas continuous monitoring can detect and send an alarm as soon as significant deviation is noted.

Figure 2 shows how ohmic value increases over the age of the battery.  Increased ohmic value correlates to loss of capacity over time. 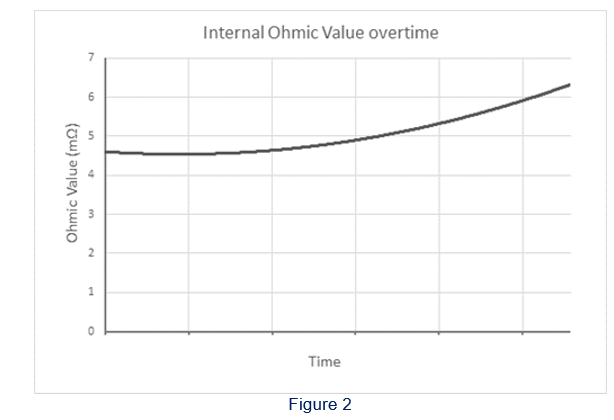 Continuous monitoring is not a substitute for regular inspection and preventive maintenance; both should be practiced.  Nor should ohmic measurement be a substitute for capacity testing.  Ohmic measurement can alert the technician that capacity testing may be necessary.  Trending the aging characteristics of a VRLA battery can be a useful tool to predict end of life for replacement planning.  Measurements should always be made with the same test instrument.  Consult with the battery manufacturer about what percentage of deviation is acceptable and when a cell or battery is considered to have failed. 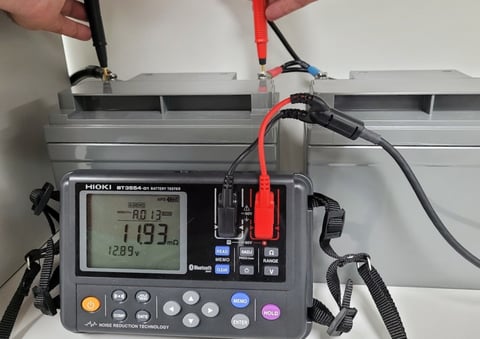